Battle Scars on the airwaves

Thanks to Armandaleg Music for this feature. I'm thrilled with how the new song has been received! Battle Scars has been played on some great radio shows like Richard Leader's American Pie, Adam Wilson's Quiet Revolution, Noel Caseys' After Midnight on Dublin City FM, Neil Kings' Along The Tracks, Mike Davies' Alternative Roots, Magpie's Folk Cafe, Blues and Roots Radio and many more. On Spotify it appeared on GSMC's New Original Music Playist, Women Rock Country in 2022 and others. My biggest thanks to everyone who has helped to get the song out into the world. 🧡

“A new artist to me… she’s gonna be a big one” Richard Leader’s American Pie, Meridian FM

“This is an amazing recording, both gentle and powerful” Felixstowe Radio 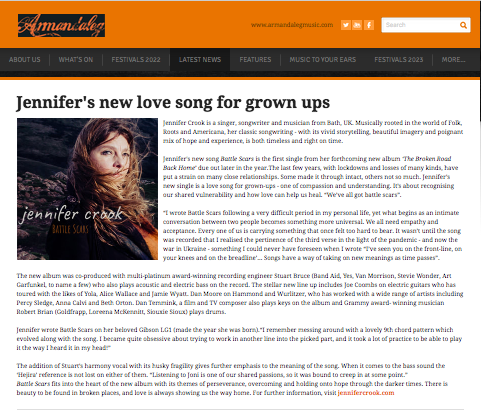